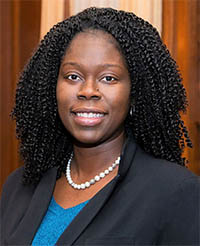 As the U.S. continues to battle COVID-19, some communities have faced more difficulties than others. This is especially true when it comes to diagnostic testing access and COVID-19 outcomes. African American people, for example, are nearly three times as likely to be hospitalized for COVID-19 compared with White people. They are nearly twice as likely to die from it too. Hispanic and Latino people share similar odds.

“We want to make sure that RADx-UP is as inclusive as possible.”

“There are populations that are facing a disproportionate burden of this pandemic, not only as it relates to health, but other factors including the economic burden, the social burden, and the employment burden,” says Monica Webb Hooper, Ph.D., deputy director of the National Institute on Minority Health and Health Disparities.

RADx-UP studies COVID-19 testing patterns in communities across the country. To do this, it collects data on differences in infection rates, disease progression, and outcomes.

“The overall goal is to understand the factors that lead to the disproportionate burden and to develop testing interventions to decrease disparities in COVID-19,” Dr. Webb Hooper says.

Groups at the center of their research include:

“So many of these populations are those who have been left behind or are not the regular focus of projects. We want to make sure that RADx-UP is as inclusive as possible and that we’re thinking about those who might be particularly vulnerable and underserved,” Dr. Webb Hooper says.

Over the past several months, RADx-UP has awarded organizations across the U.S. millions of dollars in grants to fund research in COVID-19 testing, rapid test pilot programs, and community initiatives.

“By definition, health disparities are differences you can change. They don’t have to exist,” Dr. Webb Hooper says. “The pandemic is a prime example of that. It’s allowed the country and the world to witness significant disparities roll out in real time in the context of a crisis, and it’s highlighted how this is something that needs to be addressed.”