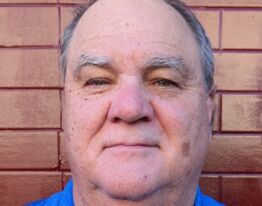 Andy is originally from New Jersey where his grandparents began a truck farm in 1910. His parents bought a small farm in Northeastern Pennsylvania in 1967 where his younger brother still has acreage under cultivation. He received a B.S. in Environmental Studies from Stockton University of N.J. Served as a Peace Corps Volunteer in the Natural Resources Program in Paraguay from 1981 to 1983.  Andy was employed as an investigator and farm labor specialist for the U.S. Department of Labor, Wage & Hour Division from 1984 to 1992 specializing in the compliance and enforcement of migrant and seasonal farmworker laws and regulations. He has worked for United States Sugar Corporation in Clewiston, FL since 1992 and holds the position of Safety and Environmental Manager. Andy also does work as a consultant for Bayer-Curran Associates, a private labor auditor approved by the Solicitor of the U.S. Department of Labor. He is a certified Environmental Auditor, a certified Environmental and Safety Officer, and current president of the Central Florida Agricultural Section of the American Society of Safety Professionals.

On a personal note, Andy has three daughters and three grandchildren. He likes to travel, speaks Spanish fluently and has visited ten countries in Latin America so far.