A personal approach to stroke treatment 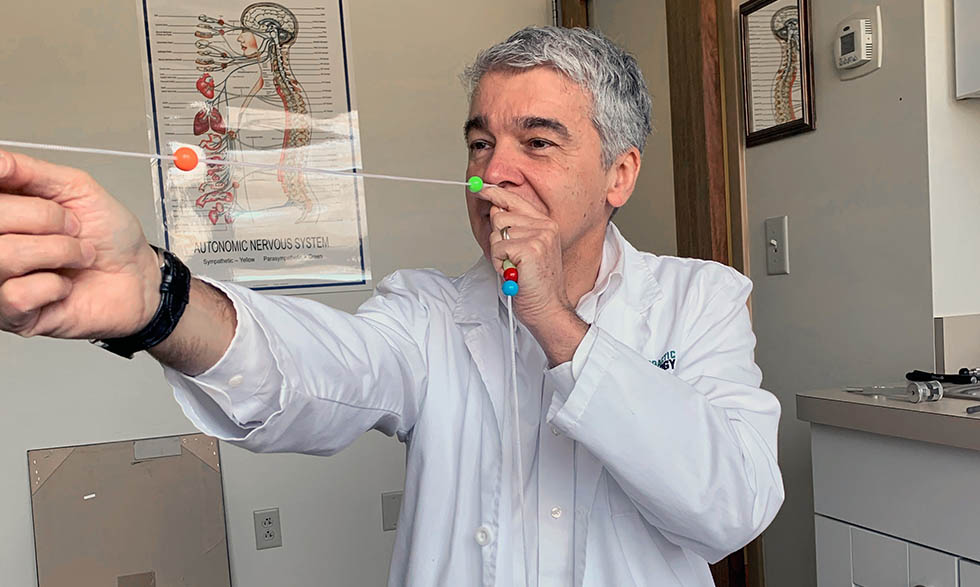 Gregory Symko, D.C., is a chiropractor who specializes in helping people with brain issues related to stroke. He helps them improve their hand-eye coordination and balance issues, working with their arms, legs, or hands.

Dr. Symko also brings a unique perspective to his work: He is a stroke survivor.

When he was 40 years old, Dr. Symko had a stroke, which he later learned had been a series of five mini-strokes.

“I realized that if I could do brain-based therapy for myself, I could help other stroke victims recover.”

Dr. Symko’s stroke left him unable to see, eat, or walk. Something as simple as raindrops or wind on his hand would cause severe pain, and he had to wear gloves to help prevent it.

“It was terrible,” he recalls. “I had extreme burning in my arm, leg, and face.”

His symptoms became worse over time. In addition to pain and numbness, he also had vertigo, which makes you feel like you are spinning. This caused severe balance issues. He also couldn’t focus his eyes on anything.

“When you have a stroke, your brain gets confused,” he says. “Parts of your brain that deal with your sense of touch can get messed up.” For example, his left arm was numb, but he experienced extreme pain in his right arm.

For a few years, Dr. Symko couldn’t do anything on his own and had to get help from his wife, family, and health care professionals.

But after three years of hard work with physical therapists and occupational therapists, and on his own, Dr. Symko was able to go back to work—just not as a chiropractor. He worked at a pharmaceutical company and continued to take care of himself by eating well, exercising daily, and using brain-based therapy. He had to reteach his brain to focus and gain use of his limbs again.

Now 61, he says that he treats patients from a different perspective.

“A stroke changes you,” he says. “It put my life on pause for seven years, but now I’m healthier than ever.” He eats healthier foods and understands the impact that exercise has on his brain.

While Dr. Symko occasionally has vision issues at night and trouble walking due to balance problems, he says he doesn’t get discouraged.

“I view these issues as a message to push even harder to remain healthy,” he says.

Dr. Symko advises those who have suffered a stroke or who care for stroke victims to be patient and not give up.

“Eat well, get lots of sleep, and exercise regularly to keep your brain active,” he says. “Strokes aren’t the end of the world. You have to work at recovery all the time.”