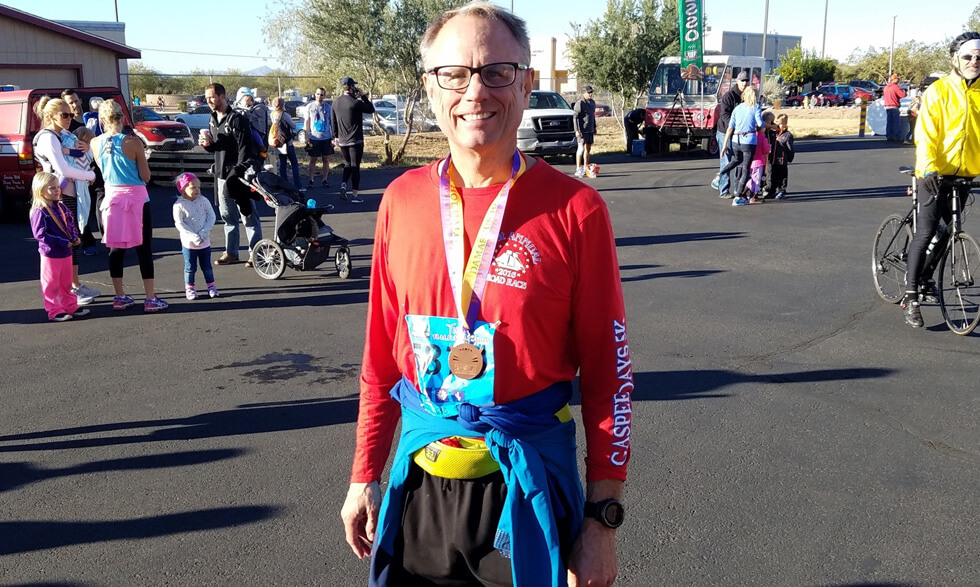 In early 2016, Rhode Island resident Ted Simon had a tickle in his throat that wouldn’t go away.

When the tickle turned into a cough, he went to see his primary care doctor.

The diagnosis? Stage 4 lung cancer—advanced cancer that had already spread to some other parts of the body.

Most lung cancers do not cause symptoms until they have spread, but some people with early lung cancer do have symptoms. Those include a cough that does not go away or gets worse, coughing up blood, and weight loss.

“I was shocked to be diagnosed with advanced lung cancer at age 60,” Ted says. “I’m an avid runner. Never been a smoker. And I didn’t have any other risk factors.”

“Imaging and other diagnostic tools are a mainstay in our efforts to stay ahead of my cancer.”

The most common risk factor for lung cancer is cigarette smoking, as well as exposure to radon, asbestos, and other types of dangerous chemicals. But like Ted, some patients with lung cancer don’t have any risk factors.

Following his diagnosis, Ted discovered his doctors had diagnostic tools that would help identify and track his cancer in important ways.

The first tool that helped diagnose Ted’s condition was a simple chest X-ray. Ted was then referred to cancer specialists at the Dana-Farber Cancer Institute in Boston. They introduced him to imaging diagnostic tools that could help pinpoint more information about his cancer and its progress.

“PET scanning revealed tumors in my lung, bone, and chest,” says Ted. “I started drug treatment, which shrank my tumors to undetectable levels for 18 months. We monitored tumor reappearance with episodic CT scanning. When the cancer started growing again, we used PET scanning to identify tumor cells in the bone and then contrast MRI to monitor cancer spread.”

Ted added, “We did blood genotyping to see if any new mutations appeared. We were lucky to find the appropriate mutation for a recently approved lung cancer medication. That treatment has kept tumors static for two months while we search for other options.”

While Ted’s stage 4 diagnosis has made treatment more complicated, imaging and diagnostic tools have helped him monitor the cancer as best as possible.

“Imaging and other diagnostic tools are a mainstay in our efforts to stay ahead of my cancer.”